A lot of TV viewers were angry about the series finale of “How I Met Your Mother” this week. After nine seasons, the hero finally met the mother of his children… but then she died and he ended up with the girlfriend he started out with, another of the series regulars.

I watched the finale and didn’t care for it, but since I’d only been an occasional watcher of “Mother” over the years, it didn’t mean anything to me. But it got me thinking about the endings of stories, good and bad. What makes a satisfying ending? Is an ending just a stopping point? Is it a thematic conclusion? A full-on blowout of a finale? And should the storyteller know his ending before he starts writing, or does he just stumble upon it?

A story’s end should feel organic, but not necessarily predictable — like, now that you know it, that’s the only way it could have happened. It should enrich the story’s themes without becoming didactic, and it should use the tools and limits of its medium (TV, movie, stage, newspaper, blog … whatever).

Here, then, are five of my favorite endings. Let me know some of yours!

1. Movies: “The Godfather” — When Michael Corleone’s henchman closes the door on his wife’s sad face, it’s perfect in every way — dramatically, emotionally, cinematically. Michael gains power but loses his soul as he becomes godfather of his family’s crime empire, like his father before him. It happens quickly, after a long, excruciating confrontation. The credits pop up, boom you’re done — breathless and thrilled and completely satisfied with the epic tale you’ve just been told.

2. Theater: “A Chorus Line” — The story ends when half the characters lose their shot at a job on Broadway. But then they all return, one after the other, winners and rejects alike — in shimmering gold tuxedos to sing and dance that dazzling finale, “One.” The razzle dazzle delivers on the show’s themes thrillingly, in ways that only live theater can. (Forget the movie version.) I’ve seen the show a half-dozen times. Goosebumps every time.

3. Novels: “On the Road” — This is best read when you’re young, perhaps. But the romance of Jack Kerouac’s lumbering, searching, self-conscious final lines seduced and slayed me then and moves me still. 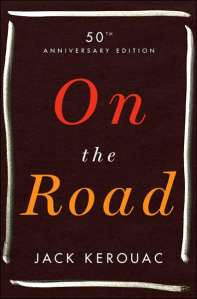 So in America when the sun goes down and I sit on the old broken-down river pier watching the long, long skies over New Jersey and sense all that raw land that rolls in one unbelievable huge bulge over to the West Coast, and all that road going, all the people dreaming in the immensity of it, and in Iowa I know by now the children must be crying in the land where they let the children cry, and tonight the stars’ll be out, and don’t you know that God is Pooh Bear? the evening star must be drooping and shedding her sparkler dims on the prairie, which is just before the coming of complete night that blesses the earth, darkens all rivers, cups the peaks and folds the final shore in, and nobody, nobody knows what’s going to happen to anybody besides the forlorn rags of growing old, I think of Dean Moriarty, I even think of Old Dean Moriarty the father we never found, I think of Dean Moriarty.

4. TV Dramas: “Six Feet Under” — I stopped watching a few years before the HBO show about a family of morticians finally wrapped, but the last 10 minutes left me blubbering uncontrollably. It was a mournful montage that flash-forwarded to reveal how all the characters eventually died. My tears were earned.

5. TV Comedies: “The Mary Tyler Moore Show” — This is a great one because it stayed true to the loving, gentle, hilarious tone of the beloved ’70s sitcom about a TV newsroom and the titular leading lady at its core. It was big-hearted, smart smart smart, funny and, yes, sad, too — without trying to be clever or flipping its premise inside-out or upside-down or whatever “How I Met Your Mother” did this week. The TV station’s new owners fire everybody but nincompoop anchor Ted Baxter, and the gang has to scatter to new jobs? Of course. Of course. But first, a song, a tear and a great group hug.