Bella blossoms along with her flowers. Click to make bigger.

Here’s a short story that can help all writers in our search for content.

My friend Evelyn Amaya Ortega posted this photo of her 8-year-old, Bella, on Instagram and Facebook with the following caption.

She planted the seeds. She waited patiently all summer as the plants grew… And grew… Getting taller and taller. This week, the flowers bloomed. #Happy

More than 140 people liked the photo on Facebook, including writer Karen Rosen who astutely noted, “That is a perfect 24-word story with illustration. It should be in a magazine.”

I agree. Evelyn’s short tale contains all the elements of a narrative. Character, location, conflict, rising action, climax — even a sweet denouement.

The next time someone tells you they don’t have enough material or space to craft a story, show him this.

In business writing, the same holds true under the content-marketing definition of story. The image and text are compelling, engaging and emotional. They could hold the interest of customers looking to buy flowers, seeds, tickets to a summer camp or even in a Public Service Announcement about good parenting and spending time with your kids.

Look at that face! That smile!

That’s a story, by any definition.

RELATED: When the photographer starts running

As I like to say, “Stories are everything, and everything is content.” Thanks to Ann Handley for this clever way of putting it, which she shared at Content Rising in Boston.

What’s the difference between a story and a narrative?

Between a story and information?

And what does it mean to run #LikeAGirl?

Such were the questions about 300 content marketers, storytellers and other media pros discussed last week at a conference I attended in Boston. Content Rising, put on by the Boston-based Skyword agency, focused on how to engage audiences with useful, compelling content — articles, video, photos, social media and more. It was one of those energizing experiences you hope for from a professional gathering, with lots of smart people, goodwill and creative energy bouncing around.

I love how events like this get covered now via Twitter. It’s like having a roomful of reporters sharing best quotes and reactions. Here are 13 tweets from the experience that give a pretty good overview of what’s being discussed about content marketing and storytelling these days.

Marketing Stats amid the Media Evolution

Tom Gerace, founder and CEO of Skyword, opened with stats that show brands need to stop interrupting what consumers want and instead become what they want. Take a look at these photos. Marketers believe their work has changed more in the last two years than since the dawn of television. On Facebook, 15 billion pieces of content are posted each month.

76% of marketers think marketing has changed more in the past 2 years than in the past 50. @tomgerace #ContentRising pic.twitter.com/OmbYbWPu5R

Stop interrupting what people love, and become what they love. Why? Check out the stats: @tomgerace #ContentRising pic.twitter.com/tuMMpztRxg

@tomgerace notes that $600B is spent in interrupt advertising today. When will marketers start doing something different? #ContentRising

Storytelling Tips from a Master

Robert McKee, a screenwriting coach and author on storytelling, shared some thoughts on what  a story is and is not — and pointed out that young adults and teen-agers are too smart for traditional, B.S. marketing that’s little more than bragging.

I love a wise curmudgeon who calls people on their B.S.

"Story is the essential form of human thought and of human communication." – @McKeeStory #ContentRising

A leader is somebody who creates their own story. Powerful idea @McKeeStory #ContentRising

If you can't express your information in story form, you don't understand it. Great challenge @McKeeStory #ContentRising

Look for little opportunities to enliven such traditionally dull, perfunctory spots as the “About Us” page with copy that can be fun and deliver your brand voice.

Finally, A Few Words on Innovation

I went to Cleveland for a few days last September, and let me tell you, it was one of the best things I did all year.

I decided to attend a conference, Content Marketing World, in a flash of inspiration. I had mulled going earlier, and when a new online friend and industry leader suggested I go, I snagged a cheap flight and a room at the venue hotel, and, before I could say “Get off of my blue suede shoes,” I was in the land of the Rock and Roll Hall of Fame.

As a former journalist working in traditional corporate communications, I was jazzed to see so many examples of how to creatively, purposefully blend the two disciplines and others. With top authors, brands and social media represented, the conference has grown in attendance annually.

Business communicators of all kinds have been turning more and more to storytelling techniques, brand journalism and content marketing, and conferences like this are a great chance to learn from the best and mingle with peers. I stole ideas and made connections in Cleveland — with good, smart people in a supportive environment.

Similar events cover some of the same ground, and maybe this year I’ll plan ahead with one or more of these:

We love talking and reading about the Oscars as much as we love going to the movies, it seems. And as Oscar Night has morphed into Awards Season, there’s more to read about the Academy Awards than ever.

Here’s a list of 15 fun or smart pieces I’ve come upon recently, broken up into categories – from storytelling to fashion, from diversity to travel and parties.

All 20 acting nominees are white, and many observers complain that “Selma” was the victim of the mostly white Academy’s tendency to ignore achievements by African-Americans.

The lack of nominations for “Selma” director Ava DuVernay and star David Oyelowo were a particular flashpoint, viewed by many as unjust oversights not only because they merited honoring, but because their absences furthered an ignoble Oscar history.

2. Martyred genius Alan Turing of “The Imitation Game” spawned this piece: Why do gay characters have to die in order for actors to get Oscar nominations?

3. The Hollywood Reporter talked to a voter about “Selma,” who said, “There’s no art to it.”

4. And another who didn’t ‘get’ the movie “Birdman” and found  “Whiplash” offensive

5. How content marketers can learn from Hollywood’s menu of offerings, from the Spin Sucks column for marketing and PR pros.

Profits from big summer blockbusters and popcorn thrillers can help to offset smaller returns on indie films and niche documentaries.

Each type of movie content has its place in the overall scheme.

6. How Marketers can win the Oscars.

No award show is bigger than the Oscars. Last year, 43 million people tuned in, earning it the largest nonsporting television audience since the finale of Friends. But the event isn’t just about a few hours on a TV screen. Through digital, audiences are engaging with the Academy Awards well before, during, and after the actual event. On Google alone, there were tens of millions of Oscar-related searches last year. It would likely take decades to watch the variety of Oscar-related content on YouTube. This all adds up to many new opportunities for brands to participate in these massive cultural moments beyond the telecast.

7. Do you trust your audience? Storytelling lessons from a great movie

Here’s hoping for a bumpy night. (Notable loser: Bette Davis did not win for her greatest role, in “All About Eve.”)

8. How to throw an Oscar party — my piece on Coca-Cola’s Journey site.

9. From The New York Times, 8 trips inspired by Oscar-nominated films – including a visit to The Martin Luther king, Jr., National Historic Site in Atlanta.

14. Harper’s Bazaar has pictures of all the Best Actress dresses through the decades.

15. Oscar has had his regrets, particularly about ‘Crash’ — Academy members reassess past Oscar decisions.

My parents required my three sisters and me to attend Sunday school and church every week until we turned 12. They weren’t particularly religious, but they told us later that they primarily wanted us to “know the stories” — of the Bible and Moses and Jesus — that are so woven into our culture and collective consciousness.

Later, I decided to become a writer because I found that telling stories connected me to other people — those I wrote about and those who read what I wrote. I didn’t realize then how starved I was for that connection and how important storytelling would become to my identity and my place in the world.

I’m thinking about this right now as Shane Snow of Contently is presenting on the power of storytelling at the Content Marketing World conference in Cleveland.

Those thoughts lined up for me listening to Shane share observations like, “Stories help us build relationships and feel connected.”

It’s all lined up for me before. But amid talk about case studies and ROI and Instagram campaigns, I’m again grateful for the lifelong connections and identity I’ve received through stories. 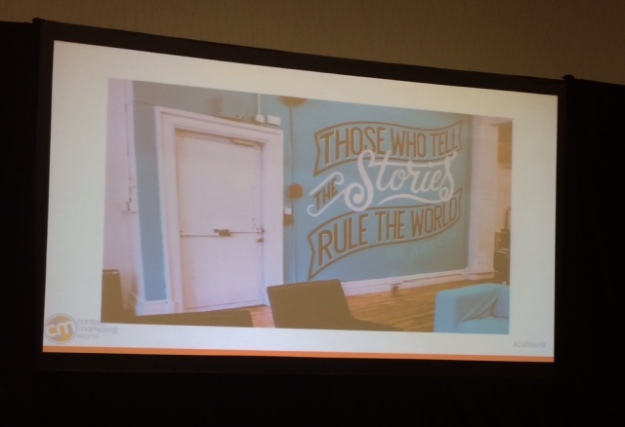 Shane showed this slide, a photo from his office. (I Instagrammed it at the top.)

Joe Pulizzi’s “Epic Content Marketing” is available in all formats. I liked the audiobook version so much I downloaded the Kindle version.

I read a lot about content marketing — books, blogs, Twitter feeds, white papers. There’s so much content about content that it’s great to find an outstanding piece to recommend — something that speaks with authority but isn’t didactic. Something well-reported and smoothly written. Something with an expert’s knowledge and a mentor’s heart.

Joe Pulizzi’s most recent book, “Epic Content Marketing,” hits all those marks and more. Pulizzi has legions of followers and the book came out last year. But everyone interested in brand journalism/storytelling/content marketing should find something of interest and value here, from beginners to experts, from writers to CEOs.  Even the know-it-alls on theory will appreciate the countless examples of best practices Pulizzi presents. He’s like Malcolm Gladwell (“Outliers,” “The Tipping Point”) in his thorough presentation of case studies that prove his points about communicating to drive business goals.

Here are nine highlights of “Epic Content Marketing.” Some will be familiar, some fresh, and others might just crystallize your thoughts. That’s part of the value of a book like this – it’s a little bit of everything, in a broad and useful context. Flip through it, skip around. Lots of good stuff. You know: good content worth sharing and discussing.

Along with endless examples of brands, bloggers and resources to help writers, marketers and executives, Pulizzi employs helpful formatting that keeps his reasoning on track and the book highly readable.

But the book’s most endearing strength is his good-hearted enthusiasm. He’s sharing what he’s learned because he’s excited about it and wants you to be, too.

Worked on me, Joe.