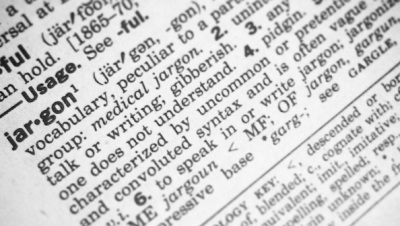 Another buddy from my newspaper days has started working in corporate communications, one more straight shooter struggling with jargon and other biz-speak gobbledygook.

But this might be. My friend seems to have found an answer to the eternal cosmic question: Why in the world would anyone use these nonsensical words, phrases and non-words, when simple, plain English is always there, just waiting to be used (NOT utilized)?

Before we get to his explanation, though, let’s enjoy some of the new terms he’s been struggling with in his day-to-day role.

That’s one my friend has slipped into using. He doesn’t like it, but he’s surrounded by jargon all day now. Sometimes, he can’t win.

“Who knows why I used that,” he told me. “Why did I not just say, ‘I hope it’s not too much trouble’ instead? There are so many options. It’s awful.”

Here we get to the solution (NOT solve).

“Am I trying to impress somebody?” he went on. “Because it’s not really impressive. Maybe I’m just trying to fit in. Is that why people talk like this — not to show they’re smart, but just to show they fit in?”

Could be, buddy. And maybe that’s why all those years in newspapers we talked about “slugs” and “perp walks” and “news hole.”

But I’m still gonna shout “Rewrite!” if somebody asks me to goal a wing-to-wing solve.

RELATED: Are you ‘contextualized’…?