In Atlanta Saturday night. Yes, they did “It’s Gettin’ Hot in Here.”

So there we were Saturday night, watching a buff young man in nothing but tiny briefs and a curvaceous blonde woman wearing only a Victoria’s Secret bra and panties. He was singing “Love to Love You, Baby” and playing the glockenspiel while she accompanied him on the cello.

This was sometime after the Rhianna tune but before the Carole King number.

Just another fund-raiser in Atlanta? Or a chance to see three essential truths of communications and business brought together by two hot, young Broadway performers who sing and play their barely covered butts off? 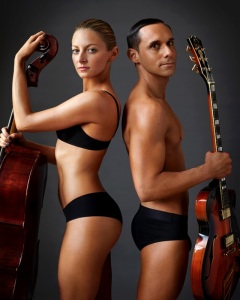 The Skivvies are Lauren Molina and Nick Cearley, award-winning NYC singer/actor/musicians performing stripped down arrangements of eclectic covers and eccentric originals. Not only is the music stripped down – cello, ukulele, glockenspiel, melodica – but the Skivvies literally strip down to their underwear to perform. The Wall Street Journal calls them “smart, sophisticated…ingenious,” and Out Magazine says, “The Skivvies have managed to carve out a niche that we never knew needed to exist: part Weird Al-parody and part sexy burlesque…and unusual explosion of satire and sultry.”

The duo (along with a percussionist — older, rounder, in boxer shorts) played a benefit for Actor’s Express at the Westside Cultural Arts Center in West Midtown. In other words, an audience used to a high level of performing excellence. And the group delivered so well and definitively that you had to wonder: What’s up with the underwear thing?

And that’s where we get to the three lessons I mentioned before.

There might be a fourth lesson, as well. The Skivvies play fast – mashing up songs, sometimes playing just enough for the audience to recognize one before zipping off to another, usually connected by a theme (generally sexual, some unprintable). A friend pointed out the lesson for today’s communicators and marketers: Don’t take too long. Nobody has time or the attention span. Hit the high note, flash the abs and move on fast.

OK, a fifth lesson: Get back to Pilates.

RELATED: How to beat Atlanta’s traffic