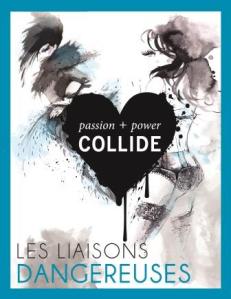 At Actor’s Express in Atlanta

I saw a play Saturday night in Atlanta, the premiere of “Les Liaisons Dangereuses” at Actor’s Express. It’s a rockin’ good time for the most part, but what struck me most is that this story has been told so many times in so many ways — and it’s still just as juicy.

The tale of sexual politics, cruelty and manipulation set in pre-revolution France started as a novel in 1782. It then became a play and an Oscar-winning movie, “Dangerous Liaisons,” and then another big-time movie, “Valmont,” by an Oscar-winning director. And there was even a teen knockoff in the ’90s called “Cruel Intentions,” with Sarah Michelle Gellar, Ryan Phillippe and a very young Reese Witherspoon.

Rich, mean, sexy people doing nasty things to each other and the innocents around them… juicy dialog ripe for actors to tear into… What’s not to love? Did “Les Liaisons Dangereuses” set the template for soap operas? Maybe not, but it’s easy to see why storytellers in various media keep going back to it, and Actor’s Express handles it admirably. So go and have a fun time at the theater.

Or at least join me in renting “Dangerous Liaisons,” which I haven’t seen in ages.

While I was at the show, I missed the Atlanta BeltLine’s Lantern Parade. I would’ve gone otherwise and I’m sorry I missed it. But here is a great roundup from the great Maria Saporta that does what I would’ve tried to do, but lots better.

And while we’re sharing cool blog posts about cool weekend events in Atlanta, check out this nifty replay in GIFs of the Falcons nail-biter over the Saints from Breslanta.com.